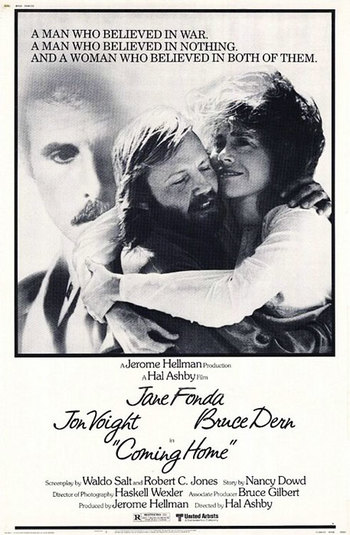 "The reason why I'm here is because a buddy of mine who'd been in 'Nam took his own life today. This is kind of a funeral service. And I'm here because I'm trying to tell people, man, if we want to commit suicide, we have plenty of reasons to do it right here at home. We don't have to go to Vietnam to find reasons to kill ourselves. I just don't think we should be over there."
— Luke Martin
Advertisement:

Coming Home is a 1978 drama film directed by Hal Ashby and starring Jon Voight and Jane Fonda, both of whom won Academy Awards for their roles along with screenwriter Waldo Salt.

After housewife Sally Hyde's (Fonda) husband Bob (Bruce Dern), a US Marine Corps captain, is deployed to Vietnam, she decides to volunteer at a VA hospital. There, she meets with an old classmate, Luke Martin (Voight), who is now a paraplegic after his tour of duty. Sally fills the deep void in her life by having an affair with Luke. Things start to get really complicated when Bob comes back home and Luke takes up protesting the war.

This film feature ps examples of: