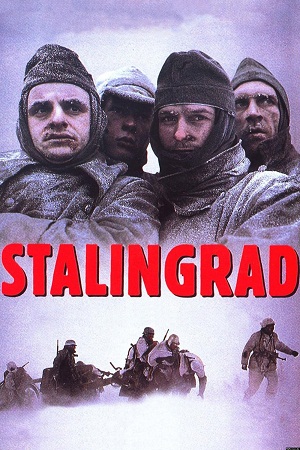 The battle that changed everything.
"If you start to think around here, you go crazy."
— Obergefreiter Fritz Reiser
Advertisement:

Stalingrad is a 1993 German war film directed by Joseph Vilsmaier.

The film follows a platoon of Heer soldiers through their service on the Eastern Front fighting Soviet forces, centred around, naturally, the Battle of Stalingrad. Along the way, the brutality of the conflict they find themselves in leaves them demoralized, as they try to find a way to cope with the war. Thomas Kretschmann stars as Lieutenant von Witzland, the leader of the platoon.

See also the 2013 Russian film with the same title (that also happens to star Thomas Kretschmann) and Enemy at the Gates for other points of view on the battle.