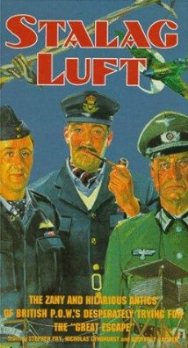 Stalag Luft is a made-for-TV BBC comedy, first shown in 1993.

The film parodies the usual clichés of the prison escape plots, set at an undisclosed Stalag Luft camp. They’re led by the RAF Captain James Forrester (Stephen Fry), who is aided by the “Champ” Cosgrove (Nicholas Lyndhurst), in an ambitious, 24th escape bid to break out all 300+ prisoners at once. However, nothing is at it seems as it becomes apparent that German guards and their Kommandant (Geoffrey Palmer), might not be all that intent on keeping them in. Hilarity Ensues as the plot twists and turns all the way throughout its brief running time.