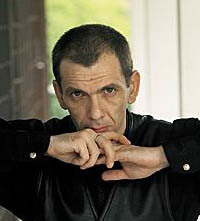 Andrey Lvovich Livadny is a Russian science fiction writer, specializing in Military Science Fiction. He is most known for his Long-Running Book Series called The History of the Galaxy, which includes over 60 novels.
Advertisement:

Born on May 27, 1969, in the city of Pskov, Andrei was an avid reader from an early age. But it was the Russian translation of Robert A. Heinlein's The Orphans of the Sky that decided his choice of future occupation. The story has become a pivotal moment in the boy's life, leaving a lasting impression on him.

Andrei wrote his first book at the age of eight. Since then, he's never stopped working on new books. His passion for science fiction has gradually become his career.

In 1998, Andrei debuted in Russia's leading publishing house EKSMO with his novella The Island of Hope. Since then, he has penned over 90 books that have enjoyed a total of 153 editions.

Andrei has created several unique worlds, each unlike the previous. He wrote A History of Our Galaxy (see The History of the Galaxy) with humanity itself as a protagonist. This sixty-book series creates a history of our future civilization and its contacts with alien races, forming a convincing and logical picture of humanity's development for two millennia from now.

Andrei's recent involvement with the bestselling genre of Lit RPG - books set in online roleplaying games - inspired him to create his most intriguing series to date, Phantom Server. Merging virtual reality with hard science fiction and space exploration, the two first books of the series, Edge of Reality (Phantom Server Book #1) and The Outlaw (Phantom Server Book #2) prompted an Amazon reviewer to call Andrei "one of the best new authors in American Sci Fi translated from Russian".

Besides hard science fiction, Andrei Livadny also works in cyberpunk genres which allow him to focus on human relationships and raise questions about artificial intelligence and identity uploading, describing cyberspace as humanity's future environment. The English translation of A History of Our Galaxy will be available shortly.