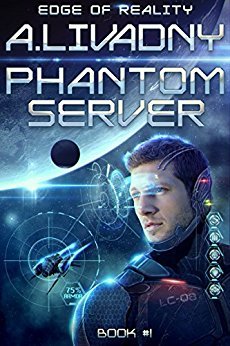 Zander (Ander in the original) is a virtual dweller, preferring to spend most of his time in realistic VR games rather than the Crapsack World he lives in. Considering that one can't go outside without special gear, many of his contemporaries also fit the bill. Obsessed with realism in games, Zander agreed to an experimental procedure that implants him with a device that makes him feel as if he really is in a virtual world. Bored with existing games, he comes across something called Phantom Server. When he asks an acquaintance named Arbido about it, Arbido tells him that it's a bleeding-edge game being developed that is supposed to be hyperrealistic, to the point where one has to have implants similar to Zander's just to play. The game is also in alpha testing, and there are rumors of people going in and never coming out. Zander just assumes the game is so addicting that no one wants to leave. He pays an exorbitant sum to Arbido to get him access to alpha testing.

As soon as Zander logs into Phantom Server, he finds himself aboard an ancient derelict Space Station in a remote star system, beset by hostile alien creatures. He is shocked to discover that the game's realism also includes pain, lots of pain. He is also restricted from logging out at certain locations and during certain situations (apparently, that's all in the user agreement he was supposed to have signed, except Arbido did it for him and failed to tell him certain details). The company's tech support people do, however, make sure that Zander's physical body is placed into his life support pod, so he doesn't have to worry about it expiring from lack of food, drink, or sleep. It's not long before Zander discovers the game's backstory.

Millions of years ago, a race now only known as the Founders (Departed in the original) has invented a Subspace Ansible but had no Faster-Than-Light Travel. So, they built automated self-replicating ships and sent them out at STL. After arriving to a suitable system, the ships build space stations from available resources, make more of themselves, and move on. The stations are equipped with FTL data receivers, as well as machines capable of rebuilding a biological organism based on a template. Thus, Founders were able to explore the galaxy by transmitting their uploaded minds to other systems and downloading them into cloned bodies. When they got bored with a system, they would simply send their consciousness elsewhere. According to legend, there is a hub station called the Phantom Server somewhere that controls these transmitters.

The Darg System, where the game is set, is populated with a number of sentient races, the most villainous of which are the Dargians, who have enslaved several of their neighboring races and use them as Battle Thralls. They hold several of the Founder stations and attempt to study the technology. Humans are also present in the system, being the remains of a colony fleet that has arrived some time ago before being destroyed by the Dargians. There is also a small number of Haash, a race of reptilian aliens from another system, who are equally hated by the Dargians (who want to enslave them) and the humans (who hate all aliens, regardless of race). The system is periodically attacked by advanced ships called Phantom Fighters.

As Zander explores this enormous virtual world, he learns that some players have spent so much time in this world that they have lost their Real Life identities and have willingly become NPCs, perceiving this world as real. He also finds several bodies, suggesting that the reason many players haven't left the game is because they died, their bodies reacting to the shock of virtual death and very real pain by shutting down their hearts.

By the end of the first novel, Zander realizes that the game developers have decided to cover up the very real deaths in the game by eliminating those alpha testers, who haven't become NPCs, as unwanted witnesses. Any survivors are labeled as Outlaws, and the newly-arrived beta testers simply assume they're hostile NPCs that need to be killed.

The trilogy consists of the following novels: