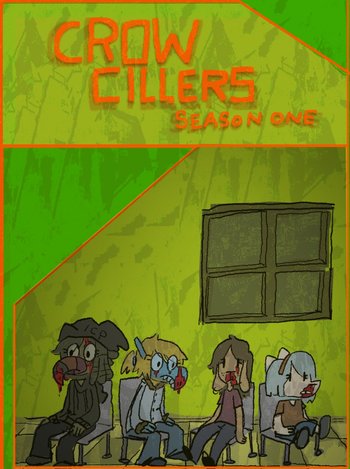 Early art from the first printing of the Crow Cillers Season 1 DVD.note From left to right: Doris, Cortney, Emma, That Kid.
Advertisement:

Crow Cillersnote Pronounced "Crow Killers" is a surrealist drama horror comedy furry coming-of-age queer Webcomic by Cate Wurtz (F.K.A. Partydog, of Asscastle fame) about a group of friends who band together to do battle with a mysterious and antagonistic cult-like society known as the Order of The Crow. Both the Crow Cillers and the Order seek to understand a mysterious Eldritch Creature, or maybe it's an Eldritch Dimension of Existence known only as Ynce Iche.note Pronounced Yeence Eesh

...At least, that's what it's BASICALLY about. Crow Cillers defies the traditional format of a webcomic. It's also a meta-commentary on pop culture, often of the past (particularly the turn of the millennium) but also of the contemporary era, both celebrating and poking fun at obsessive fandom, while in the world of Crow Cillers, fiction and reality blend into a confusing mess and nothing is certain, the audience and characters about as confused as each other.

Crow Cillers can be read monthly as each issue is released at Cate Wurtz's patreon.

Alternatively, you can purchase each season in a mock 'DVD' (complete with bonus features) from the official Lamezone itch.io page

. The first four seasons are free on the author's website