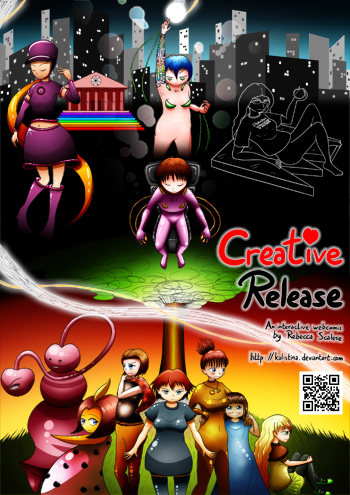 The main cast. Bottom line, from left to right: Cherry, Apple, ???, Ann, Sakura, Annette and Sharada. In the middle is Etoile, and above him is the entity he pilots; on the right stands the author. The character on the left hasn't been formally introduced.
Advertisement:

An interactive Webcomic by Rebecca Scalese

, started in March 2012. Currently updated about once every third week, on Monday. Homepage here

This is the story of Ann, a girl freshly created by magic, forced into a mysterious world ruled by a strange character called the Author. She then encounters Apple, a fruit-like character who quickly becomes her friend. But as soon as the two girls get to know each other, Apple is attacked by a strange cherry creature, brutally wounding her before attacking Ann herself. Acting instinctively, Ann casts her first magic spell, sending her before the Author itself, who tells her that in order to save Apple, she has to learn to control her magic.

That's where you, the reader, kicks in.

You’re in front of your computer. There’s a tropes list below. You totally ought to check it out.