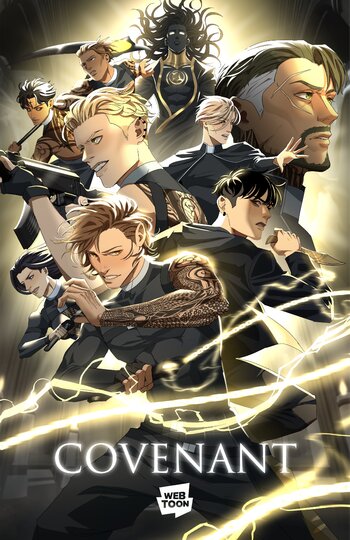 "I believe in demons for I have seen them. I believe in angels for I know them. And though I cannot believe in God, I can believe in my purpose."
—Ezra
Advertisement:

Ezra is a young and talented exorcist with a problem: He doesn't believe in God. And though it doesn't stop him from doing his job, it keeps him from unleashing his true potential.

And things certainly aren't getting easier: With demonic forces stronger than ever before invading the Church of Providence' precinct, cryptic warnings of a war to come from Ezra's patron Gabriel and his sudden assignment to protect a seemingly normal human named Sunny, will Ezra find his conviction before it's too late?

Covenant was created by explodikid

. The comic is available for free on Webtoon