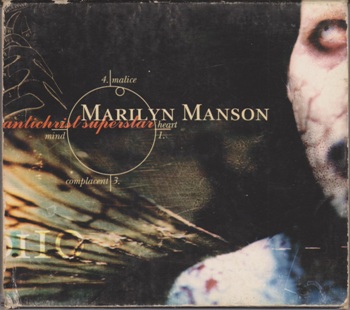 "When you are suffering, know that I have betrayed you."
"When all of your wishes are granted, many of your dreams will be destroyed."
— "Man That You Fear"
Advertisement:

Antichrist Superstar is the second studio album by Marilyn Manson, released in 1996.

It is part of a trilogy (or a "triptych") of Rock Opera Concept Albums alongside Manson's two following releases, Mechanical Animals (1998) and Holy Wood (In the Shadow of the Valley of Death) (2000). However, since the series' story is told in reverse chronological order, Antichrist Superstar therefore ends the narrative.

The central storyline on the album revolves around a supernatural being who seizes all power from humanity and becomes a hate-driven demagogue in order to initiate an apocalyptic end event, with the premise serving as a metaphor for the perceived fascism of conservatism and artificial beauty.

In retrospect, Antichrist Superstar has been credited for bringing an end to the grunge craze within popular music and has been honored as one of the greatest hard rock albums of all time (although its sound is closer to Industrial Metal). It's best known for the title track and the single "The Beautiful People", which has gone on to become one of the band's signature songs and be used as the opening theme for WWE SmackDown between 2001 and 2003.