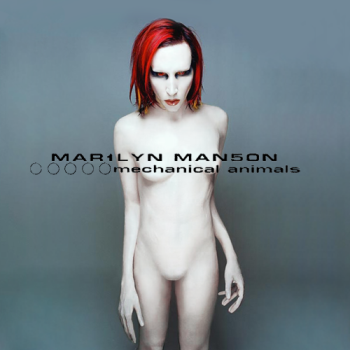 "We were neurophobic and perfect
the day that we lost our souls."
"Rock is deader than dead
Shock is all in your head
Your sex and your dope is all that were fed
So fuck all your protests and put them to bed

God is in the TV."
— "Rock is Dead"
Advertisement:

This album is the second part of a trilogy/"triptych" that started off with Antichrist Superstar (1996) and would be concluded with Holy Wood (In the Shadow of the Valley of Death) (2000); much like those albums, this is a Rock Opera/Concept Album. However, since the triptych's narrative is told in reverse order, Mechanical Animals bridges the gap from Holy Wood to Antichrist Superstar.

Mechanical Animals is the only album in the triptych to revolve around two characters instead of one, who each have seven songs (half of the album) told from their perspective:

The album was unique since it showcased the band briefly foraying into Glam Rock and straying away from their Industrial Metal roots; this was a move that wasn't greeted with ample enthusiasm, leading the band to return to their original sound in future works.

It is in no way related to the children's cartoon Animal Mechanicals or the trope Mechanical Animals.

"We're all stars now in the trope show":