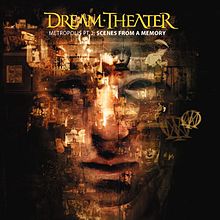 Close your eyes and begin to relax. Take a deep breath, and let it out slowly. Concentrate on your breathing; with each breath, you become more relaxed.

Imagine you are reading a webpage about Metropolis Pt. 2: Scenes from a Memory, a 1999 rock opera/concept album by the progressive metal band Dream Theater. It follows the story of a man named Nicholas and his hypnosis-induced exploration of a past life involving love and murder as a young woman named Victoria Page.

Now as I count back from ten to one, you will feel more peaceful and calm.

You will enter a safe place, where nothing can harm you.

The album is a sequel to the song "Metropolis Pt. 1: The Miracle and the Sleeper", from the band's 1992 album Images and Words. Scenes from a Memory greatly expands on the story and thematic concept originally presented in the song using narrative lyrics from the points of view of multiple characters interspersed with technically and rhythmically detailed music and instrumentals.

If, at any point, you want to read a serious, in-depth plot summary of the album, all you need to do is look at the Other Wiki

Tracklist:note Most pressings separate scenes 2, 3 and 7 across two tracks each.

Scenes from a Memory provides examples of: