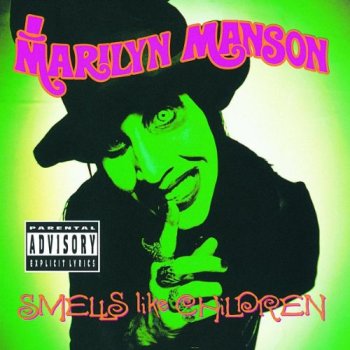 "I've always liked the Peter Pan idea of being a kid in mind if not in body, and Smells Like Children was supposed to be a record for someone who's no longer a child, someone who, like myself, wants their innocence back now that they're corrupted enough to appreciate it."
— Marilyn Manson
Advertisement:

Smells Like Children is the first EP and second release by American rock band Marilyn Manson, fittingly released a week before Halloween 1995.

The EP began life as a remix single for "Dope Hat", but throughout the touring cycle for Portrait, enough music was produced to warrant another release between personnel contributions and new material. The EP was also the first work by the band to feature several longtime members: bassist Twiggy Ramirez and drummer Ginger Fish.

Several years following its release, Manson summarized the EP as "an album that looks like an album for children that is not for children", with a thematic center in the concept of abuse that he felt appropriately prefaced the band's next release, the album Antichrist Superstar.

The EP was certified Platinum, spearheaded primarily by the smash success of the band's cover of Eurythmics' "Sweet Dreams", the music video of which became a MTV staple and helped to establish the band in the mainstream.

Diary of a Trope Fiend: