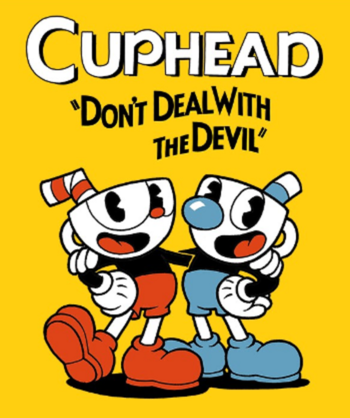 Good day for a swell battle!
Well, Cuphead and his pal Mugman,
They like to roll the dice.
By chance they came 'pon Devil's game,
And gosh, they paid the price, paid the price...
And now they're fighting for their lives
On a mission fraught with dread.
And if they proceed but don't succeed,
Well... the Devil will take their heads!
—Opening Theme
Cuphead: Don't Deal with the Devil is a Run-and-Gun game developed by Studio MDHR for Xbox One, Windows PC,
Advertisement:
Steam, GOG.com, Macintosh, Nintendo Switch, and PlayStation 4.

The game was first conceptualized in 2010, initially announced in 2014, and released on September 29th, 2017 as an Xbox One and Windows exclusive. Microsoft partially funded the game's development, though because Studio MDHR is still an independent developer, Microsoft has allowed the game to be ported to competing platforms. The port for Macintosh computers released on October 18th, 2018. The Nintendo Switch port was released on April 19th, 2019. All versions received a 1.2 update in conjunction with the Switch release, which added localized text in eleven languages, new boss phases, the ability to play as Mugman in single player mode, and extra touches like new animations. Afterwards, it was released for the PlayStation 4 on July 28th, 2020.

Cuphead and his brother Mugman, who live in the enchanted Inkwell Isles, wind up on the wrong side of the tracks and come across the Devil's Casino. They go on a winning streak playing Craps and eventually gamble against the Devil himself. Though Mugman sees the danger and tries to warn his brother, Cuphead becomes blinded by easy riches. When the Devil bets all his treasure for their souls, Cuphead takes the bet... and loses. Just before the Devil claims their souls, the duo say they will do anything to keep their lives. The Devil, seeing an opportunity, spares them on the condition that they collect the Soul Contracts of other unfortunate characters who have lost to him. The journey of Cuphead and Mugman will see them travel through trippy environments and face off against equally-trippy opponents...

...and this happens for a good reason: the game is intended to mimic the art style and "feel" of a classic Max and Dave Fleischer cartoon. The developers hand-animated every character and effect in the game to achieve this look, and their devotion to their work shows in every frame. Microsoft's financial backing to the developers after the game's original 2014 reveal — a move that helped expand the game but also delayed it for another 3 years — certainly helped in that regard.

A downloadable expansion titled The Delicious Last Coursenote Get it? DLC. was announced in 2018; initially scheduled for a 2019 release date, it was pushed back to 2020, then delayed indefinitely due to the COVID-19 Pandemic before eventually being released on June 30th, 2022. The downloadable content adds an extra island with additional bosses, a new story, and extra playable character in the formerly non-playable Legendary Chalice, now brought back to life as Ms. Chalice.

The Delicious Last Course entails the cups traveling to Inkwell Isle 4 to help the Legendary Chalice find a way to come back to life. At first, she gives them a special Astral Cookie that allows her to switch places with one of the cups, but that's only a temporary solution. She takes the brothers to the jolly Chef Saltbaker, the best baker in the land. Not only did he make the Astral Cookies, he's also been working on a recipe for the mystical Wondertart, which can grant whoever eats it control over the Astral Plane. It's up to Cuphead, Mugman, and Ms. Chalice to scour Inkwell Isle 4 for the necessary Wondertart ingredients so they can bring Ms. Chalice back to life for good.

The game has been followed by a number of different tie-ins in different media (including minor representation in Super Smash Bros. Ultimate). For more information on these, please refer to the Franchise page.

Cuphead, Mugman, and Ms. Chalice have defeated Chef Saltbaker! Unfortunately, in the process, the bakery is destroyed and Ms. Chalice failed to get the Wondertart to make her real. However, Ms. Chalice vows that she won't give up hope and one day she'll find a way to be alive. And in the meantime, she has two best friends in the world that make her feel alive: Cuphead and Mugman.

Cuphead, Mugman, and Ms. Chalice have defeated Chef Saltbaker! Unfortunately, in the process, the bakery is destroyed and Ms. Chalice failed to get the Wondertart to make her real. However, Ms. Chalice vows that she won't give up hope and one day she'll find a way to be alive. And in the meantime, she has two best friends in the world that make her feel alive: Cuphead and Mugman.