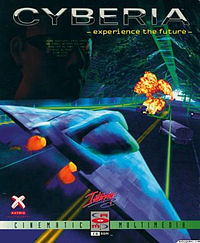 Cyberia is a science fiction action adventure video game developed by Xatrix, originally released by Interplay Entertainment for MS-DOS in January 1994, and released two years later on the PlayStation, Sega Saturn, and 3DO consoles. A sequel, Cyberia 2: Resurrection, was released by Virgin Interactive in 1995 for both DOS and Windows 9x formats.
Advertisement:

Cyberia is set in the near future of the year 2027, five years after a global economic collapse. The world is under the dominion of two opposing superpowers, the First World Alliance in the west and the Cartel in the east. Devlin, the leader of the FWA, receives word that a devastating weapon is being produced in a secret base in Siberia, referred to as the Cyberia Complex. Curious to unravel the mysteries of this weapon, Devlin pardons a cyber-hacker named Zebulon Pike (Zak) and charges him with the task of infiltrating the Complex and retrieving intel on the weapon being produced there.

Much like OverBlood, if you're on this page, it's most likely due to Game Informer's Super Replay of the game.

Not to be confused with Syberia.