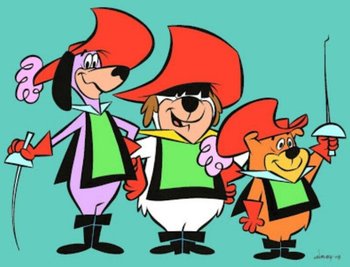 Yippee, Yappee and Yahooey are a trio of Hanna-Barbera Funny Animal cartoon characters whose shorts are set in what appear to be The Cavalier Years. Imagine a crossover of The Three Musketeers and The Three Stooges and you'll have a good sense of what these three characters were about. Yippee, Yappee and Yahooey are the King's Royal Guards, but cause so much trouble for their sovereign that he'd be better off getting protection from his so-called protectors — it's not for nothing that the King often refers to them as his "goofy guards." Amusing Injuries and overall soldierly ineptitude are the order of the day in this series, with the King bearing the brunt of the abuse.

Yippee, a blue-colored hound, is played by Doug Young (best known for voicing Doggie Daddy). Yappee, a white-furred sheepdog, is voiced by Hal Smith (he plays the King as well). Yahooey, a small brown-hued bulldog, is voiced by Daws Butler in a manner reminiscent of Jerry Lewis (he even speaks in a similarly singsong fashion). All three wear fancy plume-studded swashbuckler hats and tabards as well as cavalier-style boots and gloves, and their trusty fencing swords are normally within reach if not in hand. When on the move, they often announce themselves, shouting "Yippee! Yappee! Yahoo-ey-ey-ey-ey!"

They appeared as the last Three Shorts entry in The Peter Potamus Show. Apart from a brief mention in an Animaniacs episode by Slappy Squirrel, they pretty much vanished after their show ran its course, until they finally reappeared in Jellystone!.