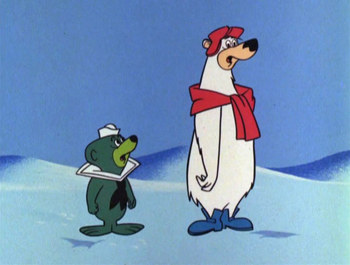 Breezly and Sneezly are a pair of Hanna-Barbera Funny Animal cartoon characters. Breezly is a polar bear clad in a red scarf and winter-style earflap hat as well as blue winter boots. His seal sidekick Sneezly wears a white sailor's hat and collar and black scarf tie. Their home is an igloo located somewhere in the Arctic, not far from Camp Frostbite, a US army base presided over by Colonel Fuzzby. Like Yogi Bear, Breezly is a troublemaking moocher who continually attempts to break into the army base to steal food or supplies, or for some other mischievous reason — severely trying the Colonel's patience in the process, but usually ingratiating himself to the enlisted men (though Breezly and the Colonel sometimes find a mutual reason to cooperate). The bear's pal Sneezly has a chronic cold that manifests itself in frequent, explosive, and often destructive sneezes.

Howard Morris provided the voice for Breezly, while the voice actor for Sneezly was Mel Blanc. John Stephenson played Colonel Fuzzby. They appeared as the second Three Shorts entry in first The Peter Potamus Show and subsequently in The Magilla Gorilla Show.

Neither character was seen much after their show ended, though Breezly did make a cameo appearance in an episode of Harvey Birdman, Attorney at Law.