Video Game / What the Golf? 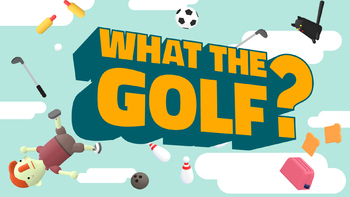 The golf game for people who hate golf.
What the Golf? is a 3D comedy golf video game developed and published by Triband, primarily funded through the crowdfunding website Fig.
Advertisement:

In this game, you play multiple little challenges that act as a parody of golf and its rules, whether you need to shoot a ball, a soccer ball, a horse, a couch, a cat, a little humanoid golf ball, or the golfer himself. Between the different challenges, you play as a golf ball who progresses through an abandoned laboratory (the exception are the A.Is and the few NPCs here and there, who are here without real reason). It appears this place is not as safe as one might think.

What the Golf? was released on PC and iOS in September 2019 and on Nintendo Switch in May 2020. New level packs have been added via free updates.