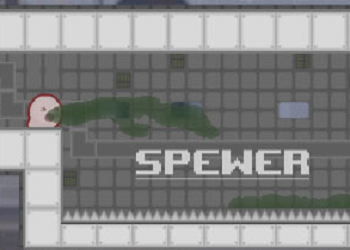 Spewer is an indie Web Game created by Edmund McMillen, and was later rereleased in The Basement Collection for Steam, along with several other games.
Advertisement:

The plot is vague, but simple. You control a creature called Spewer, while the Doctor observes you. These tests are all physics platforming levels involving Spewer's ability to... spew... puke to propel himself around. Throughout the game, Spewer will be fed pills that allow him to spew clouds, high-power puke, tar and acid in five chapters of increasing difficulty (and a bonus X chapter.)