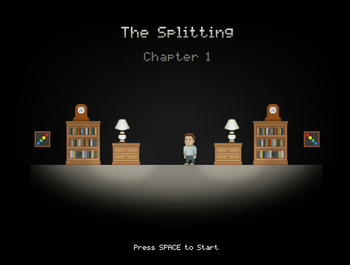 The Splitting is an online Adventure Game by Fireberry Studio

. The original game was released

in September 2016, and chapter 3 was released

It begins with a man named Daniel waking up one day without a reflection. It turns out that having a reflection is the only thing preventing people from passing through the mirror and ending up in the mirror world on the other side. Daniel meets a reflection named llehctiM, and the two of them start on a journey to find their other selves.

Puzzles revolve around manipulating items from both worlds. The mirror world is a great way to get duplicates of items. It can also cause trouble as the mirror world is falling apart in any area without a mirror, destroying important items and blocking some paths with rubble.