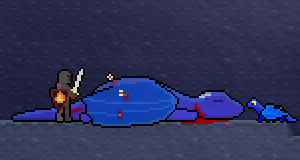 A hero meets a monster, but which is which?
"Once upon a time the world was ruled by dragons, until a fearless knight rose up to fight them. The world of dragons was destroyed, and among the ruins, a child is born... "
— Text from the introduction of the official trailer
Advertisement:

Dragon's Wake is a 2D Platform Game by Brainbox Software, an independent game studio based in Canberra, Australia. This is their first game. It was released on PC through Steam on 11th December, 2015.

The player takes on the role of a newly hatched blue dragon. In the first level the player hatches from their egg, and is then left to explore and learn about the world and their place in it.