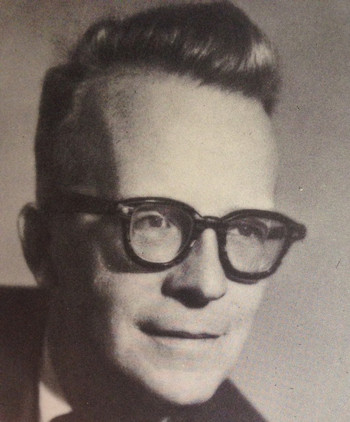 "The best kind of book is a magic book, naturally."
Edward McMakin Eager (1911-1964) was a playwright, lyricist, and the author of seven children's fantasy books.
Advertisement:

Eager started writing for children later in life, when he found that some of the books he remembered fondly from his own childhood didn't hold up when he tried to interest his own son in reading. While searching for something for his son to read, he discovered the works of E. Nesbit and fell in love with them, considering her the greatest writer for children age nine to twelve. It is almost impossible to discuss Eager's books without mentioning Nesbit, as many of his books can almost be considered unofficial companion pieces to Nesbit's, expanding on and playing with ideas Nesbit introduced. Most of his books contain both a direct Shout-Out to Nesbit by name and a reference to one or more of her books, frequently in the form of having the characters themselves cite her as a favorite author. His books are characterized as low fantasy in which ordinary children in contemporary (well, The Roaring '20s) settings discover a magical item that allows them to have a series of (mis)adventures.

Works by Edward Eager with their own page include:

Other works by Edward Eager contain examples of: