Film / I Know Where I'm Going! 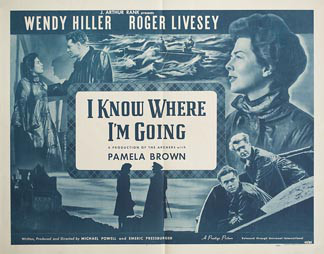 From the acclaimed directors/producers/writers Michael Powell and Emeric Pressburger, comes a magical Romantic Comedy, I Know Where I'm Going! (1945).

Since her childhood, Joan Webster (Wendy Hiller) knows what she wants and how to get it. At 25, she becomes engaged to Robert Bellinger, a rich, middle-aged industrialist of Consolidated Chemical Industries, who lives in the Scottish Hebrides on the island of Kiloran. Saying goodbye to her beloved father, she sets off on a long journey to the Isles, readying herself for an organized and secluded life. But something stops her plans; she's trapped on Port Erraig on the Isle of Mull—just a few miles from Kiloran— due to an impending gale. Staying at a local's house, she meets Torquil MacNeil (Roger Livesey), a navy man on 8 days leave who's waiting to go home to Kiloran.

Romantic tensions mount as they spend time together waiting out the gale, causing Joan to question her dream of marrying Bellinger and make desperate attempts to get to Kiloran—weather permitting or not.