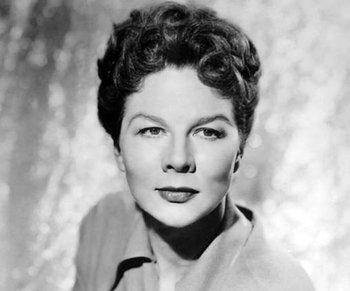 "I hope this award means cash - hard cash. I want lots of lovely offers to go filming in Hollywood, preferably in the winter so I can avoid all the horrid cold over here."
— Hiller, after winning an Oscar for Separate Tables
Advertisement:

Dame Wendy Margaret Hiller, DBE (15 August 1912 — 14 May 2003) was an English film and stage actor. For over 50 years, she played intelligent women in her youth and slowly began to play any and every stuffy English woman before Maggie Smith could take her place.

Hiller began acting at age 18, mostly in plays in her native England, where she received critical acclaim for her role in Love on the Dole. She toured England and happened to be spotted by the great English playwright, George Bernard Shaw: he loved her as his Saint Joan and Eliza Doolittle. When it came time to adapt Pygmalion to the screen, Hiller got the lead role through Shaw’s insistence (and became the first actress to use the word "bloody" in a film). She received an Academy Award nomination for her role but didn’t win. She would be nominated two more times and would win for Separate Tables.

Film success, however, didn’t end her love of the stage, and she continued to work and receive acclaimed reviews for her performances. She appeared in the stage adaptations of Tess of the d'Urbervilles, and she also originated the role of Catherine Sloper in The Heiress. Despite certainly fitting the archetype of the Shakespearian Actor, she actually did only a few a Shakespeare's plays, preferring more modern works.

She did few movies in the 1940s but did appear in several classics of British cinema which include Major Barbara (another Shaw adaptation) and the Michael Powell and Emeric Pressburger Romantic Comedy, I Know Where I'm Going!.

Hiller continued her stage work throughout the 50s, and she latched on to the new world of television. This new medium proved to be perfect for her:she worked prolifically in TV throughout the remaining three decades of her career.

She was married to playwright Richard Gow, and they had two children, Ann and Anthony. A very private person, she never cared for the Hollywood lifestyle and preferred her secluded home in Buckinghamshire. She died at the age of 90.