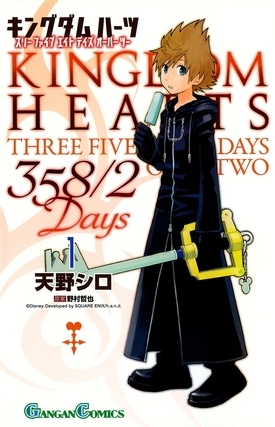 Like all the other Kingdom Hearts manga, the 358/2 Days manga largely follows the plot of the source material (in this case, Roxas's time in Organization XIII before Kingdom Hearts II) while making minor changes and additions. It's also, in general, Denser and Wackier, being far more comedic than the game it's based on, although it is also arguably more heartfelt due to a greater expansion on character perspectives beyond Roxas.

As of February 2015, the entire five volume series is available in English, Japanese, and German.