Series / Have You Been Paying Attention? 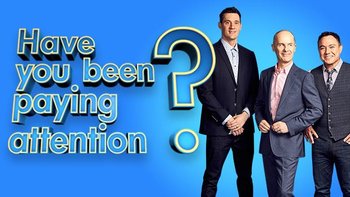 An Australian Panel Game in a somewhat similar vein to the BBC's Have I Got News for You (though with a larger focus on the "quiz" side of things, as the contestants actually score more than five points), Have You Been Paying Attention?, as its intro suggests, tests a group of five comedians/radio personalities on the week's events.

Made by Working Dog Productions in 2013 for Network 10 and presented by Tom Gleisner, the show, like similar British shows, also has a pair of regulars in the form of Ed Kavalee and Sam Pang.

A New Zealand version of the show began broadcasting in July, 2019.

Rounds
Like many quiz shows, each episode of HBYPA? picks from a pool of rounds; some being permanent fixtures while others drop in and out to fill the gaps as needed.