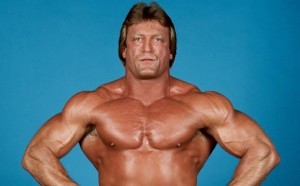 After a brief stint in American Football, he became a professional wrestler, initially wrestling in a number of small promotions in the American South. In 1983, he signed a contract with the WWF, where he received the moniker "Mr. Wonderful" from his manager, Roddy Piper. In his five years with the WWF, he notably took part in the first ever WrestleMania, and feuded with Hulk Hogan for over two years. An arm injury, however, led him to retire in 1988.

In 1990, he returned to wrestling, this time for WCW. His injury continued to dog him, however, and he eventually retired for good in 2000. He also wrestled for SMW, New Japan Pro-Wrestling and various National Wrestling Alliance territories.

As for his in-ring achievements, he was a 2x WCW World Tag Team Champion

A throat cancer survivor, passed away at the age of 71.

"♫♪...you know these tropes are Wonderful, and they know it too!♪♫":