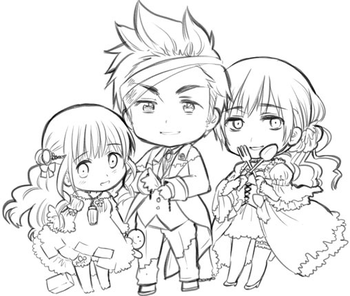 After a two year break, the Hetalia holiday tradition of an event made for no reason other than for Fanservice resumes. This is the first event to be held since the hiatus in the midst of the Bloodbath of 2011 and still ongoing.

The plot of this event revolves around some of the nation-tans coming together for a Halloween party in a haunted mansion. The theme of this party is "spirits" and everyone who attends is dressed as a spirit that has a famous story from their respective countries. However, all goes wrong as the nations are trapped within this mansion and have to tell ghost stories based on their costumes to please the evil spirit of the mansion.

Memes related to this event can be found here.

This event shows examples of the following tropes