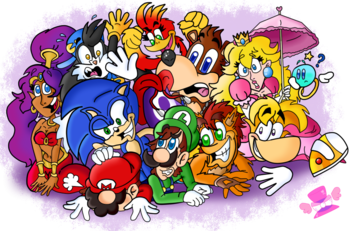 Platformers is a discontinued webcomic by Claire Aimée Spencer, aka YourClairyGodmother

. It is a Massive Multiplayer Crossover where the heroes of various videogames (mainly, of course, platformers) join forces to stop both old and new foes from wreaking havoc on their worlds and others.

Unfortunately became an Orphaned Series as of 2020.

. The author has also posted some lore in her DeviantArt journals.