Music / Does It Offend You, Yeah? 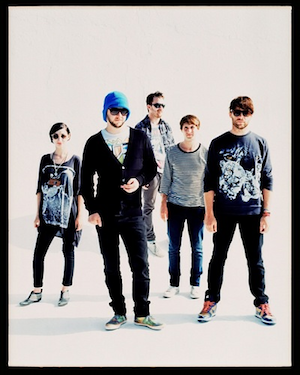 I know the time you've spent with me, it wasn't easy...

Does It Offend You, Yeah?

are a British electronic/rock band from Reading, Berkshire. Formed in 2006, the current lineup consists of JAMESDANROBMATTCHLOE, or James Rushent (vocals, guitar), Dan Coop (synthesizer), Rob Bloomfield (drums), Matty Derham (guitar, synthesizer, previously of the band Fields), and Chloe Duveaux (bass, formerly of the band Elle Milano). The band has only changed its lineup once, as their former guitarist Morgan Quaintance left the band in 2009.

Named after a line Ricky Gervais said in an episode of the UK version of The Office, DIOYY (as they are commonly known) are known for their loud and energetic live shows and their style, which can switch to Daft Punk-esque electronica to simple acoustic rock in no time flat, as can be seen here

. Their most famous song, "We Are Rockstars", was used in the trailer for Fast & Furious in 2009. In addition, the band's songs have also been used in stuff from an episode of Chuck to the 2010 version of Need for Speed: Hot Pursuit to an episode of Gossip Girl to the 81st Academy Awards. You might've heard their songs before, even if you don't know who the band is.

The band has released two albums:

The band originally announced their disbandment in 2015. Though in September 2021, they have announced their return with a third album being titled We Do Our Own Stunts, set to be released in 2022.

These examples make me, they break me, and maybe, they're draiiiiiiining...