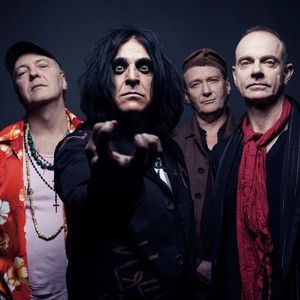 Killing Joke are a Post-Punk band from London, England. Formed in 1978, the band were instrumental in the development of Industrial Metal and various aspects of Alternative Rock. Their sound throughout the years has ranged from "quasi-Metal" Post-Punk, to Gothic Synth-Pop, to Industrial Alternative Metal. Their lineup has always been based primarily around singer Jaz Coleman and guitarist Geordie Walker, with the current (reunited founding) lineup including bassist Martin "Youth" Glover and drummer Paul Ferguson. Former members have included drummer Martin Atkins,note Public Image Ltd., Ministry, Pigface and late bassist Paul Raven,note Ministry, Prong whose sudden death caused the original lineup to reform in tribute.

While the band has only had minor commercial success, they have been cited as an influence by Ministry (perhaps their most obvious fans), Nirvana (Dave Grohl plays drums on their 2003 self-titled album!), Metallica (covered "The Wait"), Nine Inch Nails, Marilyn Manson, Slipknot, Faith No More, Rammstein, and Korn among many, many others.

Jaz is also an accomplished classical composer and sang in Mulan and Youth is a prolific producer and remixer, working with Guns N' Roses, Primal Scream, U2, Depeche Mode, Paul McCartney,note under the group name The Fireman, among many others.

Not to be confused with the Joker comic.