Western Animation / Out to Punch 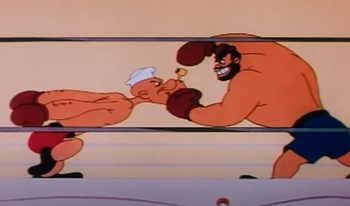 Out to Punch is a 1956 cartoon short by Famous Studios. It is part of the last batch of Popeye cartoons made by them.

Popeye is training for a high stakes boxing match against Bluto. Bluto does, of course, everything he can to hamper him and cheat, even before the match begins.

The short is a semi-remake of another Popeye boxing episode, from the Fleischer Studios era this time, 1934's Let's You and Him Fight.

Out to Punch contains examples of the following tropes: