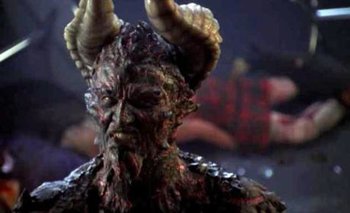 As Gunn and Fred gear up to deal with "spookies in a pipe", Angel and Lorne argue about when they should have Cordelia Chase sing for Lorne. Connor returns to his apartment with food as Cordelia is watching an old movie on TV. Cordelia thanks Connor for everything. Cordelia informs Connor that she has been unable to sleep, seeing visions of something horrible clawing its way up from underneath. Cordelia suddenly wakes up screaming after The Beast grabs hold of her neck.

Lorne takes a call about snakes, asking Angel if they fight snakes. Angel replies "only if they are giants, or demons, or giant demons." Fred and Gunn arrive at the client's apartment. They enter the bathroom, commenting on how big and luxurious it is as well as it being the kind of bathroom they want in the future. the room starts shaking and all of a sudden the glass on the medicine cabinet explodes. Rats are seen in the medicine cabinet, as well as coming out of every drain. They quickly leave the apartment, telling the client they need to hire an exterminator or burn the place down. Wesley arrives home, finding Lilah waiting for him. Lilah is dressed like and acting like Fred. As they begin to make love, Wesley tells Lilah to keep the glasses on. Fred and Gunn arrive back at the hotel, Fred being cool towards Gunn about taking a bath together. Gunn wants to have a meaningful conversation with her, Fred reluctantly agrees. Fred runs off after telling Gunn it wasn't his decision to kill Professor Sidell. Lorne continues taking calls as Angel arranges weapons. Gunn starts fielding calls and Lorne & Angel discuss how to arrange weapons. Connor arrives at the hotel and informs Angel that Cordelia is staying with him and that Angel should talk to her. Angel arrives at Connor's apartment. Angel and Cordelia start talking, Cordelia telling Angel that she was able to see and feel everything he did as Angelus. Cordelia gets a vision of The Beast coming through the pavement.

Cordelia tells Angel that her visions are more intense, the old ones being a lawn sprinkler and the new ones like Niagara Falls. Cordelia says she needs to know more about The Beast, asking if Lorne could read her again. Lorne and Gunn are taking calls while the phones are ringing off the hook. Lorne asks Gunn to get Fred to help, Gunn saying he doesn't know where she is, prompting Lorne to ask if they are okay. Before the discussion can get any further, a thump is heard at the door. Checking, Gunn finds a sparrow that killed itself by slamming into the door. As Gunn checks it over, Lorne yells at him to close the door which he does just before an entire flock of sparrows start throwing themselves into it. At Wolfram & Hart, Angel is waiting for Lilah in her office. Angel knows Lilah wouldn't say anything, so he tied Gavin Park to a chair. Angel tells Lilah he wanted to torture Gavin more, but that Gavin wouldn't stop talking long enough for him to do so. Angel wants to know what Wolfram & Hart has learned about the info they sucked out of Lorne. The psychics who have been working on that info haven't been good at deciphering it, as every time they peel back a layer, their heads explode. Angel tells Lilah that helping him is win-win for her - she helps him and he succeeds, she will be in their good graces; if he fails, Lilah wins with Angel dead. At Connor's apartment, Cordelia is about to leave and Connor returns, surprising her. She wants to go outside for a walk because she has been inside all day. Cordelia and Connor roam the streets aimlessly at first, finally arriving at the exact spot where Connor was born. The Beast suddenly appears from below ground.

Connor attacks The Beast, doing no damage to it as he flings Connor aside. It approaches Cordelia, looks at her, laughs, then flies off. Gunn is calling around, looking for Fred as Lorne continues taking calls. As Lorne and Gunn are about to leave the hotel to look for Fred, Wesley arrives. Wesley suggests they pool their resources to figure out what's happening. Gunn says he is going to look for Fred and Angel arrives holding a folder, telling him he isn't leaving. The guys pore over the pages of info Wolfram & Hart were able to decipher from Lorne's vision, unable to make sense of it. Angel asks Lorne to start mapping out where the calls have been coming from. The pages are made up of glyphs, symbols, and archaic languages, all jumbled together. Gunn gets up to stretch, looking over Wesley's shoulder as he does. Gunn realizes that they are looking too close at the pages, seeing a pattern from a distance. They lay the pages out, revealing an even larger symbol, the eye of fire. Lorne shows them a map of where the calls have been coming from, the pattern being a diamond. Fred is at the diner, talking to the waitress about how she feels. The diner starts shaking and Fred tells everyone to get away from the windows. Cordelia is tending to Connor's wounds from his encounter with The Beast. Back at the hotel, they draw the symbol on the map Lorne drew, finding that the center of the map is a temple to the flesh. They head off to the bar after arming themselves. After arriving at the rooftop bar, they see a pile of bodies and The Beast.

They start attacking The Beast, having little to no effect on it. The Beast is easily able to deflect any attack, only the shotgun blasts seem to slow it down a little. Angel engages The Beast in hand to hand combat, not doing any damage. The Beast grabs Angel and stabs Angel in the neck with a stake and tosses him off of the rooftop. The Beast then slams his fist into the ground, starting a fire in the shape of the symbol they discovered earlier. The Beast then flies off again. As the guys regroup, they realize Angel isn't with them. Angel is laying on the ground, gasping and bleeding. A column of fire shoots towards the sky. Fireballs start raining down on the city as Connor and Cordelia make love. Angel watches them from a rooftop as fireballs continue raining down.