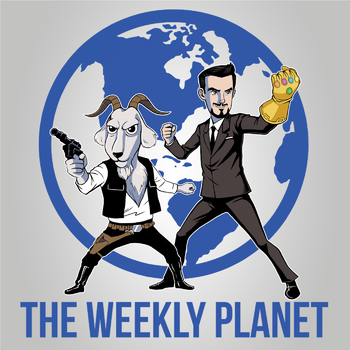 Red hot comic book movie news, shootin' up your butthoooooole...
James: So Mason, what do you think the story was?
Mason: Oh nooooooooo...
Advertisement:

The Weekly Planet is a weekly podcast that's part of the Planet Broadcasting Network *  Formerly the official podcast of Comic Book Movie dot com. Each week, James "Mr. Sunday Movies" Clement and "Internet Celebrity" Nick Mason sit down in James's mancave— er, regular room and discuss movies, comic books, TV shows, and anything else that comes to mind. The feel of the podcast is very loose and more often than not engages in rambling, humorous banter.

"That's the show for this week. Grab dat gem, you guys!"