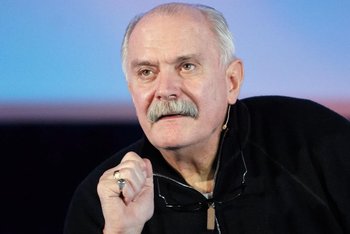 Nikita Sergeyevich Mikhalkov (born 21 October 1945 in Moscow, Russia) is a Russian director and actor, and head of the Cinematographers' Union. His family has a tradition of art, as his father wrote children's books and the lyrics to the Soviet and Russian anthems, his mother was a poetess descended from artists, and his brother Andrei Konchalovsky is an accomplished film director in his own right.

Mikhalkov studied acting at the Moscow Art Theater and the Vakhtangov Theater, and later studied film at VGIK, where he met future celebrity director Andrei Tarkovsky. Since then, his films have become famous at home and abroad. Unlike Tarkovsky, or his brother Andrei Konchalovsky, Mikhalkov has made more conventional, crowd-pleasing films, and has avoided auteur projects. On the one hand, many of his films have been at the top of Russian box-office history. On the other hand, he has been accused of being too conservative and not provocative enough.

Tropes about or used by Mikhalkov: