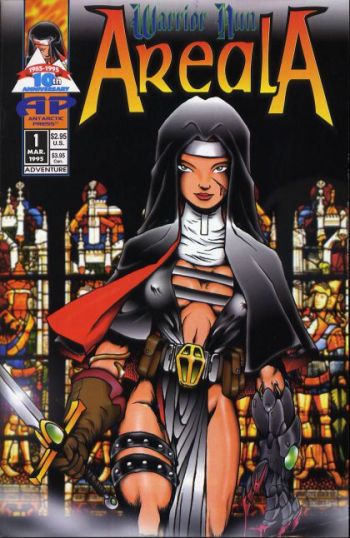 You'd be forgiven for thinking her name is "Areola".
Warrior Nun Areala is a manga-style American comic book created by Ben Dunn and published by Antarctic Press. The story revolves around Sister Shannon Masters, a Joan of Arc-like heroine of the Order of the Cruciform Sword, a fictional military order of Warrior Nuns and Magic Priests in service of the Catholic Church. First appearing in Ninja High School #38 (1987), Sister Shannon has since appeared in her own comic books, beginning with Warrior Nun Areala Vol. 1 #1 in December 1994.
Advertisement:

To say that this independent comic book series is controversial would be quite an understatement based on the subject of the series, the use of religious imagery, and the less than saintly design of certain female characters. Though considering that later authors would create their own takes on the ideas introduced in this series is also worth keeping in mind.