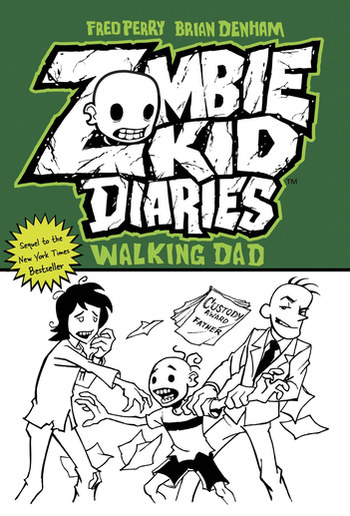 The third volume of the series, with a doubly Punny Name.
Zombie Kid Diaries is a Antarctic Press comic book / novel series written and drawn by David Hutchison and Fred Perry. A parody of the children book series Diary of a Wimpy Kid.
Advertisement:

It focus on Bill Stokes, a kid who lives with his mother (he has a father but he's doing time after nearly burning their house down for insurance money). He was a fairly ordinary child with a love for video games while his mom worked to make ends meet by volunteering at various medical companies. However on one particular day his mother came back home with a mysterious virus which spread to him. While not as fully affected as his mother was, Bill finds his body slowly changing and gaining hunger for the must unusual things like rotted food. Now he must deal with these changes while having to survive school life, all of which he conveniently records within his dairy.

The book was originally titled Diary of a Zombie Kid, but was changed after the author of the ...Wimpy Kid series sued the company thinking they were plagiarizing his books (despite it being obvious it was a parody and wasn't even close to resembling his works outside of story format). This is also the first AP comic to be sold in stores outside of comic shops due to the novel format.

made by Fred himself.