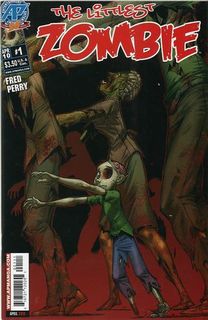 Even the undead have their ups and downs.
The Littlest Zombie is an Antarctic Press comic book from Gold Digger creator Fred Perry. It tells the story of a world ruined by nuclear warfare, where zombies now roam the Earth, looking for any survivors on whom to feed. Our protagonist is the titular unnamed zombie, who's doing his best to survive any way he can, though it's rather difficult when you're missing a foot and much bigger zombies get in your way.

The comic mostly flip-flops between said zombie and the current humans he's hunting, who are trying to avoid being killed. More often than not, the humans tend to be amoral characters willing to stab one another in the back. This is good for TLZ, however, as the end result is that he gets a meal from it.

The character first appeared in December, 2009. So far, TLZ has three short stories (one each in A Very Zombie Christmas, A Very Zombie Summer and A Very Zombie Christmas 2), two full issues (possibly headed for a full (mini)series) and one full-length special (The Littlest Zombie vs. The Littlest Vampire). Fred describes the series as Casper if he were a zombie. Indeed, TLZ does seem like a nice individual, but he can't ignore his hunger for human flesh.