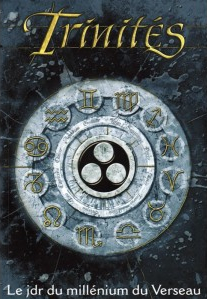 Trinités is a long-running French role-playing game, published by Les XII Singes (The 12 Apes), in which you play as, well, a "trinité" or trinity (the game not being translated into English, the appropriate word is only an assumption), a being that is composed of an Adam (the human), a Deva (a spirit of light) and an Archont (a spirit of darkness). At the age of 33, they must choose between their archont and their deva, taking a position in the ongoing war between good and evil. Trinités are superhuman beings, having twice the health of a normal human, regenerating wounds easily (unless extreme damage is inflicted, like a decapitation), but they die once they reach 99. There are 72 of them in total.

Oh, and they tend to reincarnate over the course of history. A lot.

According to the huge Metaplot, the game begins in the year 2000. This is the final battle, as the end of the world draws near. Nearly all Trinities have had more lives in which they chose darkness than light, and as such, have become "king archonts" at 33 years old, champions of darkness. The players, on the other hand, have had five lives of darkness, and five of light, and thus, keep both their deva and archont. They are all summoned, and thus born, on the same day by something once all of the other 72 have been born. The game begins as they reach the age of 33 and are contacted by their messengers, who tell them their true nature and their place in the eventual fate of the world.

It is up to the 72 to influence the final decision of the 12 Elohims regarding the fate of the world after the end. Will it be a world of light or darkness?

Think that's bad? That's just the tip of the iceberg, as countless secret organizations, besides the trinities, have influenced the fate of the world. The eight secret societies, originally created millenia ago to exterminate the trinities, are among the most powerful and widespread of them.

Not to be confused with the Trinity Universe, or one of its games, Trinity.