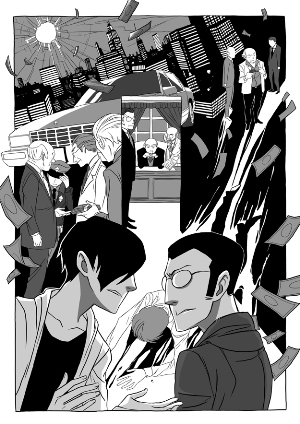 A story about growing up, friendship, and sometimes the mob.
Ferris: Oh God. Am I drooling? Please let that be blood.
Several panels later...
Demos: You're bleeding.
Ferris: Oh thank God.
Advertisement:

, but recently it has been adapted into a webcomic. The comic, also written by Cho, keeps in line with the original story, but is drawn by Yuki S

Set in 1999 in the fictional city of Southport (not to be confused with the actual, fairly small town of Southport, NY), the story centers on Ferris Levinstein, a lanky, nerdy, Jewish private school kid with only one friend: Demos Giorgetti, the local Mafia Prince. Whip-smart and snarky but lacking a well-developed sense of self-preservation, Ferris cautiously navigates a world in which his bullies get threatened by Demos's relatives, dead bodies lurk in the trunks of his family friends' cars, and cute girls steal his money only to treat him lunch a few days later.

Hey, life can be confusing when your friend is in the Mafia.

The comic updates on Fridays, but at Japan Standard Time, so Westerners are better off checking Saturday. You can read it here

. The comic has not updated since November 2017 with no explanation, though the site is still online.

Not to be confused with Fishbone.