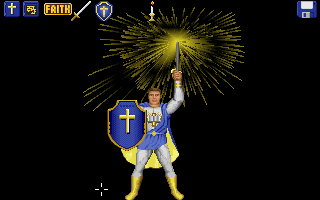 Captain Bible in Dome of Darkness, often shortened to Captain Bible, is a Christian video game made for the DOS PCs in 1994. A Christian organization called the Bible Corps finds a city encased in a dome of darkness, a forcefield around the city which makes the people inside very susceptible to being deceived. They manage to break a small hole into the dome, through which our hero, Captain Bible, must enter and free the people inside using the power of his Sword of Spirit, Shield of Faith, and various bible verses.

The game is somewhat surreal, and inside the city you will find things like robots that try to tell you things that contradict what is in The Bible, trippy vortexes that teleport you to other parts of the game, and a woman worshipping a guy who looks like Steve Jobs wearing a lamb hat. Entering the forcefield erases all of Captain Bible's Scripture verses from his computer Bible, but he can find them inside the city from various Scripture stations that give you some Bible verses. He uses these verses to confront and then battle the lying robots, and persuading the deceived people inside to agree with him. His goal is to destroy the dome by finding and piloting a giant robot called the Unibot and saving the city.

Captain Bible In Dome Of Darkness contains examples of: