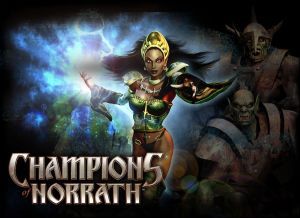 Champions of Norrath is an 2004 Action RPG on the Playstation 2 set in the world of the EverQuest MMO series, roughly three hundred years prior to the original EverQuest. This would make it a Prequel, except that this game is an Alternate Continuity that only loosely takes concepts, characters, and settings from the main series.
Advertisement:

Its plot involves an alliance of orcs and goblins, once enemies, laying siege to Faydwer, the continent of elvenkind at this point in Norrathian history. Leithkorias, King of the Wood Elves, calls out for champions to defend the land. You (and whatever people you're playing alongside if you've selected multiplayer mode) heed this call as one of five customizable race/class choices, each of which are highly customizable. The available choices are Barbarian Warrior, Erudite Wizard, High Elf Cleric, Wood Elf Ranger and Dark Elf Shadowknight. The game is separated into five chapters, and takes a major twist after the first, which culminates in your first encounter with the orc general, Pelys, who isn't what he seems. EQ's Series Mascot character, Firiona Vie, later shows up as a prominent part of the storyline. Other than Kelethin and the Faydark Forest, the entire game takes place in a portion of Norrath that doesn't exist in the main games. The final level is part of EQ, but In Name Only, as it's visual settings are completely different.

Champions of Norrath also received a 2005 sequel, Champions: Return to Arms, in which your character (along with other players) is called into the outer planes by Firiona Vie, champion of nature goddess Tunare, to defend the cosmos against an alliance of evil gods attempting to resurrect Innoruuk, the God of Hate who you killed in the first game. You have the option of importing characters from the previous installment and it seems as if the game was designed with the assumption that players would be doing this, despite claims to the contrary. This game differed from the original in that it allowed you to defect to the evil side early on, although this changed surprisingly little in regard to gameplay or storyline, the only notable variables being which final boss you fought and which side you're on in an optional dungeon in one of two Norrath-bound regions in the game. The game was released in 2003, fresh off the heels of the Planes of Power and Gates of Discord expansions in EQ. As such, most of the game takes place in the Planes of Power, and the Berzerker class was inspired by the same axe-throwing class that was added in as well.

Return to Arms was notably rushed as compared to its predecessor. Many of the dungeons recycled graphics from the previous games and the two additional character choices, Vah Shir Berserker and Iksar Shaman, lacked the amount of customization options that other choices had and even the ability to play female characters of said races (Where-as the 5 classes from the previous games received new abilities and more customization to add onto). The story also suffered, what little there was resting primarily at the start and the end of the game with only sparse developments in-between.

See also Baldur’s Gate: Dark Alliance; it was made by the same company before they switched publishers.