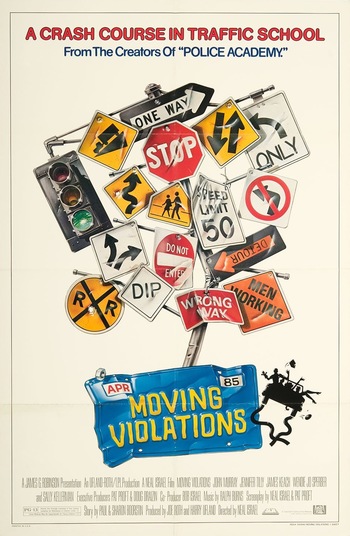 Moving Violations is a 1985 comedy film directed by Neal Israel (Police Academy, Bachelor Party), notable for starring the lesser-known siblings of many famous actors and for being the film debut of Don Cheadle.

The film follows a group of people who, after being ticketed for numerous traffic violations, lose their licenses and have their vehicles impounded. They are ordered by Judge Nedra Henderson (Sally Kellerman) to attend a driving course program in order to get their licenses and their vehicles back. However, the assigned teacher for this course, Deputy Henry "Hank" Halik (James Keach), is also conspiring with the judge in a plan to make sure these offenders fail miserably, and at any cost. This makes one of the drivers, landscaper Dana Cannon (John Murray), very suspicious and he enlists his fellow students to expose their plot to sell their impounded vehicles.