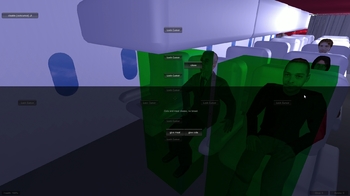 Why was such a game on Steam?.
"Do you know what does it mean?"
-Something you'll see a lot in this game.
"Ops ! It looks like terrorist are trying to steal the plane ! You need to stop them!"
-Air Control

Air Control is a game made by Killjoy Games and released on PC through Steam on May 23rd, 2014. It is known for being one of the most broken games of all time.

The objective of the game is hard to describe as you basically take on various roles, from flight attendant to air marshall. Many of the assets used in the game are stolen from the Unity Engine's internal assets (this is probably why it was eventually removed from Steam as doing so violates the terms of the Unity Engine licensing agreement).