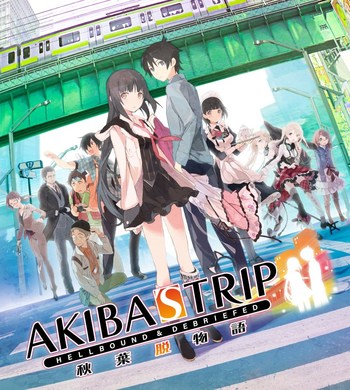 The streets of Akihabara have been overrun with creatures that are said to stalk the darkness: vampires. Human in shape, but not in ability, they blend in with the general public, but in truth are one of the biggest menaces to the tech and hobby capital's way of life. Every victim claimed by these creatures becomes sensitive to sunlight, withdrawing from outdoor life and becoming a total recluse. The more they turn, the lazier the populace becomes until the nation has reached total NEET-ification.

And your job is to strip them.

Don't walk out just yet! There's a good reason for this: Shadow Souls (the aforementioned vampires) are able to stay out in sunlight as long as most of their skin is covered. A normal shirt and slacks cover fine, but being in Akihabara gives them the option to wear any kind of clothes imaginable, from Elegant Gothic Lolita dresses to the wild styles of Japanese Delinquents to even layers upon layers of cosplay. Unfortunately for you, an incident you can't remember (which involved a vampire girl kissing you) led you getting turned into one of them, and a secret organization of hunters is taking advantage of your plight to get rid of as many of Shadow Souls as possible before they can succeed in their insidious plan. Beat them up, strip them down, find the girl who kissed you, and take back your district.

In what may be one of the weirder takes on the vampire hunting genre, Akiba's Trip: Hellbound & Debriefed is a "Strip Action RPG" published by Acquire in 2011 for the PlayStation Portable, and the start of the greater Akiba's Trip series. An Updated Re-release for the same platform released in 2012 under the title Akiba's Trip Plus. It would eventually get a sequel in Akiba's Trip: Undead & Undressed in 2013.

Unlike its sequel, neither the original game nor its Plus version got an English localization for some time. China managed to get a translation of the original, but weren't as lucky with Plus. XSEED Games eventually announced in 2019 that the Plus version would be released in English, porting it to PlayStation 4 and PC, and it was announced in early 2021 that it would be released in Japan as Akiba's Trip: First Memory on May 20 to mark the 10th anniversary of the original title. Hellbound & Debriefed would make its western debut on July 20th, 2021.