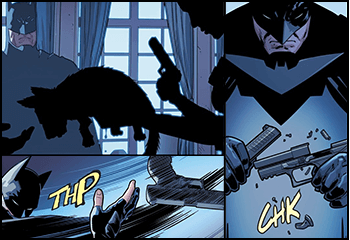 Alice is up against someone who has a gun. Before the gunman can shoot her, Alice snatches the firearm and quickly disables it right in front of the gunman. Asskicking typically ensues.

Usually used to demonstrate the badassery of a given character as well as their knowledge of firearms (unless they use brute force), and may involve Willing Suspension of Disbelief to enforce the Rule of Cool. It also makes an impressive show for the viewer. Like most Rule of Cool stuff, this is largely not Truth in Television, as some cocked-and-locked firearms cannot be taken apart without removing the magazine first (or even discharging or clearing the gun), and most of the ones that can still have plenty of little parts that need to be pulled out before the slide or barrel will come off, making disassembly a rather slow and non-dramatic process.

Still, many models of firearms are indeed very easy and quick to disassemble. One example is various military bolt-action rifles where the bolt can be removed in one motion (like the Mosin-Nagant 1891; some realistic movies and books even describe removing bolts to temporarily disable the rifles of POWs or arrested friendlies while still making them haul the bastards around). Another is handguns like Beretta 92 and SIG P22X series; these feature a disassembly lever that allows one to take the slide off the frame in one motion (after dropping the magazine). Both tricks are completely impractical in a fight, though.

Not to be confused with Gun Stripping, where the character has plenty of time to take apart the firearm, and is usually doing so in order to clean or service it.

See also: Guns Are Worthless, Blasting It Out of Their Hands, Quick Draw, Forced Friendly Fire. Might involve Not With the Safety On, You Won't.