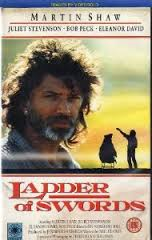 Ladder of Swords is an independent film written by Neil Clarke and Norman Hull in 1990 starring Martin Shaw and Juliet Stevenson.

Don DeMarco, Denise and Daley (the dancing bear) are ‘The Three D’s’, a circus act, who are stranded in the moors of England waiting for a phone call for their next engagement, a tour around Europe with a performing troop. For Don (Martin Shaw) this call means everything, as he’s on the run from the law and joining the troop will allow him to escape from the shadow of his crime. However while the isolated location is heaven to him, his borderline abusive, alcoholic wife Denise (Eleanor David) hates it. After exposing herself to obsessive DI Atherton (Bob Peck) and bringing suspicion on herself and her husband, she abandons Don during a fight.

When Denise fails to return, Don starts a kindling relationship with local widow, Alice Howard (Juliet Stevenson), and when the call comes, the duo leave for the coast. However Atherton follows them, blaming Don for several petty crimes and is convinced that he murdered his wife. Then Denise returns and things get even messier.

Ladder of Swords contains examples of: