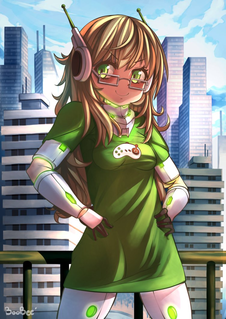 .
"You will become...an A-list superhero!"
— Ralphie Hero [talking to herself in the mirror].
Advertisement:

Gamer Girl is an ongoing superhero action comedy Web Serial Novel written by Joe Berridge Beale. It follows the bizarre adventures of Ralphie Hero, aka Gamer Girl, a superheroine with the superpower to summon the items and abilities of video game player characters. Working alongside her partner Comikazé ‘Kazé’ Maniakku, aka Fangirl, a superhero fanatic with an electric fan gun, Ralphie sets out to make a name for herself in a city already full of crime fighters. Between the monsters, the supervillains, and Ralphie’s mild sociopathic tendencies, it does not go well.

As of now, there is no update schedule, but finished chapters are always posted on a Sunday.

Character profiles, a terminology key, a trivia page, and other extra content can be found on the Gamer Girl WordPress site

Not to be confused with with the identically titled Gamer Girl (2008) young adult novel by Mari Mancusi.