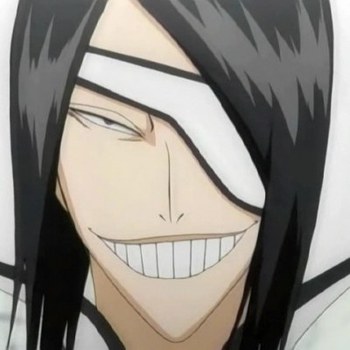 Smile for the camera!
I'm a fright with my tombstone smile
All the children run away from me.
— They Might Be Giants, "Cyclops Rock"
Advertisement:

Most human mouths have roughly 32 teeth of an assortment of different shapes, but not in this case. These teeth are unnaturally large, straight, and uniformly rectangular — bearing a striking resemblance to white bricks or the ivory keys of a piano, and sometimes not even distinguishing where the one jaw's teeth end and the other's begin.

Depending on how it's used this trope can be either Played for Horror or Played for Laughs — and sometimes both at the same time — but is always meant to look weird and offputting. When used for comedic purposes, this trope is chiefly a form of Sudden Anatomy cueing the audience in that the character — specifically one that doesn't usually have block-shaped teeth — is up to something; and usually sets up some form of dental retribution. In cases where it's played for horror, this trope is used to indicate at the very least that something is... off... about the person these teeth belong to. This trope is popular with the Monster Clown archetype and is often paired with a Slasher Smile, some yellowing, and a bit of crookedness — all the better to better show them off while highlighting how uncanny the person who possesses them is.

A Subtrope of Scary Teeth that often overlaps with More Teeth than the Osmond Family. This style of teeth is often used as a sister trope to Tooth Strip due to its simplicity, but characters just having block-shaped teeth as part of the artistic style — without connotations of Uncanny Valley — doesn't count as this trope.