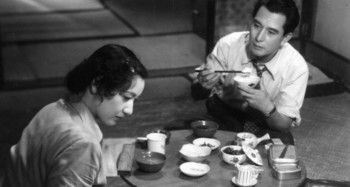 Repast is a 1951 film from Japan, directed by Mikio Naruse.

Hatsunosuke and Michiyo Okamoto (Ken Uehara and Setsuko Hara) are a married couple living in a rather run-down neighborhood in the outskirts of Osaka. While Hatsunoke seems blandly complacent with life, Michiyo is dissatisfied. Five years of marriage has left her feeling like a "slave", wondering if cooking and cleaning is all that life has to offer her. She's also homesick for Tokyo as well as resentful of Hatsunosuke's less-than-stellar career at a brokerage firm. Hatsunoke doesn't pick up on this at all, taking his wife for granted.

Into this mix sails Hatsunoke's sexy 20-year-old niece Satako. Satako has skipped out on her parents, who are trying to coax her into an Arranged Marriage. Satako is thoughtless and self-centered and soon starts drawing entirely too much attention from her uncle. Eventually a fed-up Michiyo leaves her husband and goes home.