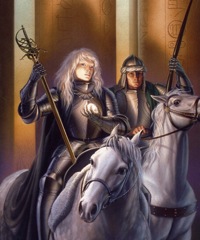 while the graphic novels are:

The books read like fantasy because they are told from the point-of-view of a samurai-like medieval warrior, Nhi Vanye I Chya (Vanye), and there's much that from his point of view is magic. However, from the point of view of characters from more advanced backgrounds, it's all just technology, albeit of the "indistinguishable from magic" category a lot of the time. The books are tenuously tied into Cherryh's Alliance/Union science-fiction universe, although this is a matter of a single quote at the start of the first book and some Backstory in a short story Cherryh published elsewhere (and the graphic novels explicitly state that the task force Morgaine is the last of was sent out on the orders of Ariane Emory herself); it does not actually feature in the story till the end of book four.

Vanye, a fratricide, is exiled as an ilin, roughly a Rōnin. Dizzy with starvation in the countryside, he accidentally frees Morgaine, a strikingly beautiful and dangerous historical figure who has been trapped within a Stargate-like Gate for over a century. He makes the mistake of taking food and shelter from her, which according to law makes her his liege-lord for a year's service, which she takes full advantage of. Turns out her mission is to close the Gates, which are messing up time and space, and she uses his service ruthlessly to do so. Each book sees her eventually destroy a world's Gate and use it before it closes up to go to the next world to do the same thing; it's implied that she's been doing this for a long time, and certainly she originally had companions, all of whom have died.

Gate of Ivrel was Cherryh's first published novel and a story she began as a teenager, and for many readers this series is still their favorite work of hers.